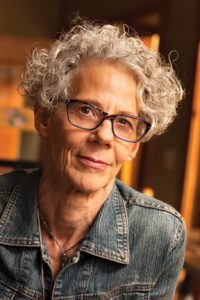 I grew up in a home where unusual big-life questions were the everyday conversation. What is our human purpose? Have the new capabilities that powerful technologies confer on the world at large changed people and if so, in what ways? Could they serve a greater good? In 1949 my parents, Barbara Marx Hubbard and Earl Wade Hubbard, met in Paris soon after the dropping of the bombs on Japan in 1945. This event prompted them to ask their unusual questions. They may have not been necessary to ponder, not so very long ago. Their answers culminated in a perspective they called conscious evolution. My mother believed it unwise to leave it up to chance that powerful technologies, such as those used to build weapons of mass destruction, would be adapted to serve peaceful purposes in the future. She felt it far better to evolve or choose this objective. Following through with this choice would be how to evolve both the purpose for the technology and the human purpose that they fulfill.

Read the article profiling me in The Beachcomber newspaper.

On one hand I was greatly influenced by my parents’ ideas, but on the other, I was passionate about the world of Nature lying right outside my front door in Lime Rock, Connecticut. I loved to observe salamanders, chipmunks, and turtles—not as a biologist would but as a student of a fellow Earthling. Suddenly I saw they were answering my mother’s question. Not verbally, of course, but in the way they live. They were fulfilling their biological life cycles and also giving something back to the larger ecosystem. Later, when I learned how to weave, it struck me that animals in the wild are the weavers of its ecological fabric. Both the craft and living interdependently share the same whole-oriented principles and thus also encompass the same purpose and value system. Our species tends not to weave as a way of life, which raises the question—what could be the human purpose that serves a greater good? 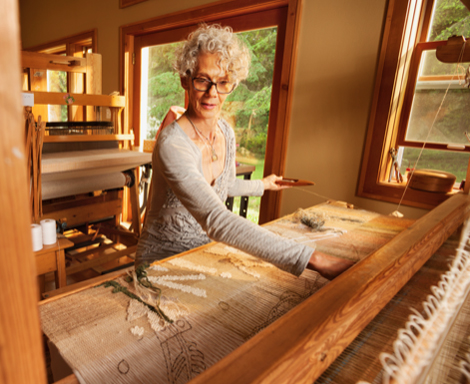 I share my parents’ desire, although my father passed early in the 2000s, to support a transition to a more whole-oriented purpose in the future. They developed the meme conscious evolution while I noticed a link between the process of weaving and it reliably creating whole textile fabrics as well as viable ecosystems. Animals in the wild follow Nature’s ecological weaving patterns––one way they serve the good of the whole. It occurred to me I could use the art form of weaving; provide the experience of its process; and highlight its principles to stimulate increased sensitivity to our relationship with the same world that weaves. A multi-textural presentation of weaving may be able to influence a more integrated approach to everyday life. This could lead to whole personal, social, and environmental fabrics.

This video documents Suzanne's process and thinking as she creates a new tapestry. Life itself is a tapestry of relationships. Click here to view full sized video on Vimeo.

The purpose of my work is threefold. I use the art form weaving to make connections between its integrative technology and Nature’s whole-oriented value system and ecological principles. My weavings provide a non-verbal textured language to relate to this invisible world and process. Second, I use weaving, journalling, and conversations in classes to develop a perspective from the experience of integrating strands and support applying the insights. Third, my writings are intended to create a bridge between our word-centric world and the non-verbal natural world. [See Publications] Presentations of the subject of weaving compose a new education to support making the transition to a sustainable future. LINKS to come: my mother’s Web site; American Visionary documentary; my father’s Web site; link to explanation of conscious evolution LINK to publications page

The desire to understand weaving’s non-verbal perspective creates a unique relationship with the craft and my purpose as an artist. Explorations and Innovations, part of the resumé below, charts a non-traditional education—homeschooling my daughter; creating stage sets; digging up my yard and planting the Living Tapestry Garden; discovering the path of a universal human; and weaving the tapestries in the Silent Oratory: A Weaver Speaks series.

I give brief explanations how each exploration evolved a process-based perspective between the years 1994–2016. Many of the experiences occurred simultaneously and developed over the course of this time period.

The trajectory of my work received a push at an early age in a home that encouraged taking risks with new ideas and unconventional careers. Two major influences were my mother, Barbara Marx Hubbard, who developed the perspective conscious evolution; and my father, Earl Wade Hubbard, space philosopher. 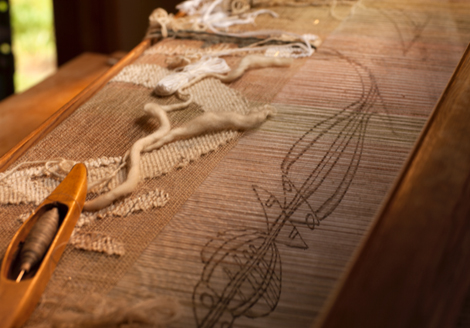 Barbara Marx Hubbard has been called “the voice for conscious evolution of our time” by Deepak Chopra and is the subject of Neale Donald Walsh’s book “The Mother of Invention.”

Barbara is a prolific author of 9 books, a visionary social innovator and educator, and is also the co-founder and co-chair of The Foundation for Conscious Evolution and president of Evolutionary Academy. 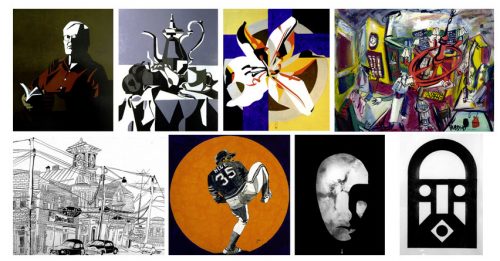 Discovering that I inherited an important missing page in art as well as American history, in addition to more than 400 paintings, was unexpected. It was my father Earl Hubbard’s wish: the content of his studio would go to his five children.

Fifteen years after he passed, my son and daughter travelled along with my husband and me to Connecticut to take inventory of the legacy he left behind.